My Favorite Musicals from Hollywood – 2

It took me a long time to appreciate the subtle philosophy embedded in Lewis Carroll’s “Alice’s Adventures in Wonderland”.  It is not without reason then, that today I am reminded of this beautiful discussion between Alice and the Cheshire Cat.

Since a few weeks now, we all seem to be edging towards this madness. As a nation, it seems that we are slowly inching towards losing our sensibilities and handing it all out on a platter to those who rule over. Let’s begin with something closer home. The Chief Minister of Tamil Nadu, J Jayalalitha has been convicted of amassing assets illegally – assets worth of over 50 crores has been deemed illegal and she has been fined a hefty sum of 100 crores 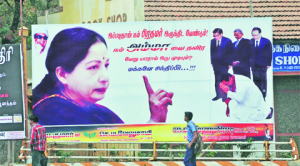 and 4 years of simple imprisonment. The amount of hullabaloo this has given rise to in the neighboring state must be seen to believe. People have apparently committed suicide, died of heart attack and cries of “Amma” “Amma” are tearing through all parts of the state.  There are posters being put up that are questioning the ability of a human being to judge a ‘Goddess’, that are threatening the Kannadigas living in Chennai with dire consequences if the lady is not released immediately, that are decrying the verdict and there are people beating their chests on the streets and burning buses and torching vehicles. Shop owners and even educational institutions are closing down (or have been forced to close down) to show solidarity with the convict.  The cult status that we elevate the leaders to, renders our sense of morality so crippled that we are absolutely OK with whatever illegal activities they may indulge in. To be 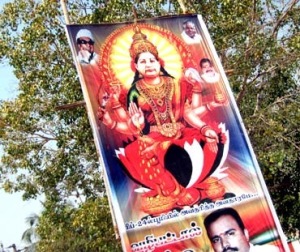 fair, this is not a sudden development. For most parts, the many poojas, demonstrations, hooliganism and havoc that the mob is creating is really orchestrated by few elements of the party. Needless to say, all that they care is about glorifying their blind devotion to the convicted leader and later earn some sops for their loyalty. But people in general are also swayed largely by the many schemes launched by the ruling party – cheap food, freebies including gold, electronic items, laptops, and many more. This is the sense of empowerment that we have come to expect of the government and the elected representatives. On their part, the elected representatives from both the major regional parties fuel this unquenchable thirst among the masses by announcing glorious freebies during every election.  Democracy is dying a slow death in our country.

The quantum of the assets accumulated by the erstwhile CM is nothing compared to the latest charges mounted against the former cabinet minister A Raja in the 2G scam. The amount runs to thousands of crores of rupees. If the investigation for 53 crores of illegal assets can run for 18 years, one dreads to imagine the time A. Raja would need to be convicted! The DMK that is now celebrating the conviction of Ms. Jayalalitha is no saint ofcourse! When Raja 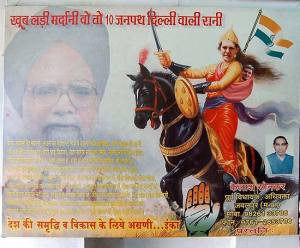 was convicted, the DMK government resorted to every means of arm twisting tactics to secure his release and even withdrew from the government. Ofcourse, this is one kettle that is calling the pot black. But even then, several party cadres had taken up the cause of their leaders and staged protests even in the parliament. The fact that they were fighting against the conviction of a crook did not seem to weigh on their conscience at all. It mattered not, that the country’s assets were being siphoned off for their individual profits and well being, but what mattered was that they were the mass leaders and above any jurisdiction. Ofcourse the electorate did vote them out of power and made the DMK taste an abysmal defeat, but then, we seem to forget the lessons we taught very soon.

This deification of the leaders is not a new phenomenon, atleast for a country like India, where kings were considered as ‘gods’! Mrs. Indira Gandhi was the manifestation of Durga when she trounced Pakistan during Bangladesh’s liberation. Even Mrs. Sonia Gandhi was showcased as Durga in an election poster that caused the BJP and other right wing organizations to cry foul. But they donned a divine silence when temples were being 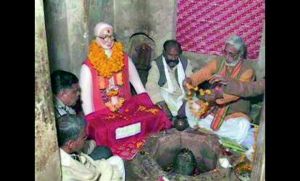 constructed for the ‘God’ Narendra Modi. We are very selective about our adoration indeed. The hatred for a party or a person, must be absolute and total – this is the current motto of Indian politics. Thus, Mr. Narendra Modi spares no chance to taunt the Nehru legacy, often discounting the first Prime Minister’s contributions to Indian cause.  And for their part, any Congress man even remotely appreciating anything good that the incumbent PM may say, is branded an anti-party person (read Shashi Tharoor). The citizenry cannot be left behind ofcourse! Anyone who questions Mr. Modi’s works is branded an anti-national! Morphed images are gloriously circulated and shared on all social media forums – images that show how cheap the opposition leaders are and how great and divine their respective leaders seem to be.  Nobody bothers to check the authenticity nor question the ideology behind such works. Heaven forbid if anyone does so much as post a cartoon about a political personality – they’ll be put behind bars in no time!

Sure – my grandmom has fasted for more than 9 days! Sure – there are thousands of people who even to this day fast during festivals for many days together. Sure – it is commonsense that it is every citizen’s responsibility to keep 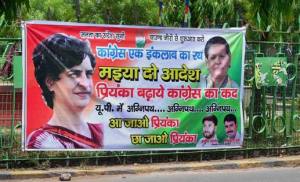 the country clean – both literally and figuratively.  But we need someone else to actually tell us to do it. We need the media to give us a blow by blow account of what the personality is eating, drinking, and wearing so that we can revere the personality. No matter how ridiculous some statements may be, we must ogle and clap and dance at every word! Every major national and regional party has become enslaved to cult politics.  Even those who used to decry dynastic politics are now celebrating one-up-man-ship and banking on a single person’s charisma to tide over every issue and challenge.  Such is the tragic state of affairs that no matter how incapable or inept a person from a family maybe, the sheer chance of being born into a family is enough to endow the person to be named as the heir apparent to administer a country. No one can and no one must question his abilities! Ironically, this is the country which advised the world to gain ‘self-knowledge’ and liberate themselves!

Democracy is an idea that enables people to govern themselves. Underlying this philosophy, are a few basic tenets. First and foremost, the public must be educated and capable of objectively viewing the representatives they have chosen. They must be able to differentiate the chaff from the grain and not succumb to petty temptations. They must be able to recognize the collective good and encourage it.  They must actively participate and remain vigilant of the administrative practices and not deter from questioning its motives and force the administration to be accountable. In India, currently, it is a far cry.  We are content to blindly follow and cry hoarse when we feel betrayed. In this modern era of enslavement, we are in reality not serving the political class, but we are serving our own ignorance and ineptitude. We may have the where-with-all to defy and win over external rulers, but we have failed abysmally in winning over our own weaknesses. This is the tragedy of Indian democracy.

As a parting shot, I am reminded of a beautiful poem composed by the noted Kannada poet Sri Nissar Ahmed – Kurigalu Saar Kurigalu… where he basically shows how we have all become sheep-like.. following others blindly. Well… Baaaaa time now!