Today, this post will be just one among the many that may be written around the world – one of the many that have been written to express the deep anguish, shock and loss over the death of the genius comic icon – Robin Williams.  I usually try to avoid writing about “breaking news” events. But this was one event that I did not want to refrain from.  This was personal for more reasons than one.

I don’t know where to begin! Watching Jumanji in a shack that passed off as a ‘movie theatre’ near my house, I marvelled at the wonder that was unravelling before my eyes.  It was much later that I comprehended the sheer fame of your name.  I had already watched Mrs. Doubtfire, but relating to you as a wonder took a while.  That was when you came hunting as Sean Maguire.  I watched the movie as though I was growing with it – scene by scene, sequence by sequence.  You made me do something I hadn’t done in a long while. I broke down and cried inconsolably for a long long time.  That was when I acknowledged you, and surrendered to your genius.  You helped me come to terms with many things in that movie. But to acknowledge pain with laughter, that was the big stroke of gift that you gave me.  You were a phenomenally soulful actor for me and then I saw the comic in you.  Who were you? I really wondered! 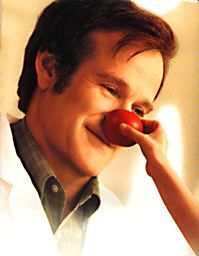 I have let down my guard so often whenever I was watching you turn into something that I guess, we all have dreamt of.  I hoped that I would meet my John Keating, I hoped that I would meet my Patch Adams.  Irrespective of whether I met them or not, I knew I could always fall back on you.  And I did fall back on you – time and again. I can’t count the number of times I have visited you as one of your patients or students. Put myself on the screen of my mind and heard you talk to me – the script transformed into something that was personal.  I guess that is exactly what distinguishes great movies from the rest.  They become personal – to one and all.  I know you have been personal to millions of viewers around the world.  You have made them laugh and cry just like you made me.

I wouldn’t call myself a great fan of yours! I don’t know your birth date, I don’t know your filmography or your career path. I have no knowledge of the number of movies you have made or the way your career took off.  I have only now heard the news and had a glimpse of it all.  But that is probably because, I seldom looked at you as an actor. Therein again lies your brilliance!  You were so many characters to me! Each one genuine, real and as fleshy as the other.  You weren’t all good either! I know that! I could see the brilliance of your darkness in Insomnia.  I acknowledged it just as well. You showed you were human.  I have learnt to accept just as well that I am human too. I came to terms with the greyness inside me too.

It was much later that I understood how you had touched almost every aspect of my intimate life.  While I was working as a Radio Jockey, I saw your portrayal in “Good Morning Vietnam” and I am still looking for a word to describe what I felt! When I write, I can hear your words from the Dead Poets’ Society whispered into my ears. There are countless hours of darkness that I have spent sitting on the chair across you Sean.  So thank you for being all of these.

Your movies left a message, your life left a message and so did your death. You were more human in all of these, than we could be.  Maybe that is the real tragedy.  I wonder how it came to be that a person who touched millions around the world through so many decades, remained untouched by hope!  Were there no hearts around you that could ignite the flame of life inside you, the way you did? Genius comes at a huge price! I have always heard people say so. You’ll also go down the pages of history as a great genius of an actor who suffered from depression, addiction and who took his life – unable to come out of it.  Creativity and talent wins a lot of admiration but few friends may be. I don’t know! I hope I am wrong.  So today, as I bid farewell to you, Robin Williams, I bid farewell to the actor, the talented, funny, warm and successful genius of the film industry.

I also thank you, because you stayed back with me.  You shall remain with me as Sean, as John Keating, as Patch Adams and through all of these, as an example to what a human can be.  We are all as fictional as those characters in our thoughts.  We are all in an attempt to make that fiction a reality.  I acknowledge the fiction of your roles as well as the reality of your absence today.  But I will always choose to cherish those fictions and I shall always strive to make them a reality.  Hopefully that may be a meaningful tribute to you and the genius in you.