Changing Landscapes: In Memory of a City

Assam has been a state that has seldom made news on a National scale.  Personally speaking, Assam for me gave the picture of the Kaziranga, the Brahmaputra, Bhupen Hazarika and the tea estates. That’s as far as my knowledge took me, till in the past one week it has seemingly captured the attention of the entire Nation, albeit for all wrong reasons.  Barely has the brouhaha over the molestation of teenage girl settled, parts of Assam are up in flames over a fresh round of violence that soon turned ethnic in nature. With over 50 deaths and lakhs rendered homeless, the state is all set to write down one of its blackest moments in History (atleast for the next few years).   Not wanting to only go with what the media seems to be telling me, I preferred to hear right from the horse’s mouth and 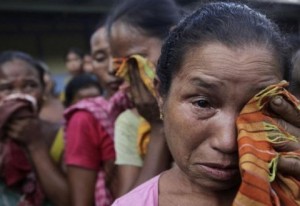 so pulled my Assom friend – Binod into conversation.  “This was a bomb that was ticking. Forget an ethnic war, the root cause of this whole outburst is the illegal immigrant problem.  One look at these pics and we can easily say that they are not from Assam, and hence they are being targeted, since they are usurping the livelihoods of the local population.” That pretty much summarized his reaction, and set my mind on a ride, about the whole issue of migration and immigration.

So what’s the difference between Migration and Immigration?  It’s a straightforward answer.  The simplest difference being that migration often ends with the group returning to its home base.  Immigration on the other hand is a complete relocation from one location to another.  Migration as a phenomenon is present as an integral part of the environment and nature that surrounds us. From birds to animals (including humans) migration is demonstrated annually.  Be it over worked husbands taking off for a month every summer, or Wildebeests moving across the African grasslands, nature has devised mechanisms well enough to direct the motion; the trigger ofcourse can be weather, food, water, or life itself (procreation).  This gives the seasonal flavor to the act of migration.

Immigration on the other hand is a ‘unnatural’ phenomenon.  Unnatural because inherently for any organism the change in its environment is the least preferred option, and certainly a highly stressful experience to go through.  Usually rather cataclysmic events would force an animal to relocate completely to a different environment.  However in a societal setup the socio-economic, religious and political factors are the chief causes for immigration.  Though natural disasters are another cause, they are not the most frequent reasons and the sheer nature of a natural calamity makes immigration seem the only option at hand.

But what I would like to look at is man-made causes that lead to legal or more importantly illegal immigration of a large population. 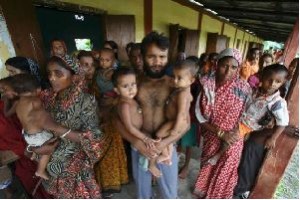 Affected people from the violence

Political causes – warfare, local unrest, and political mismanagement (bad governance) are some of the chief reasons that lead to large scale immigration of the affected groups.  These groups may either be provided political asylum by some nations or usually end up immigrating illegally across the border to the nearby stable regions.  Immigration hence, can be both within a country as well as between different nations.

The economic factors encompass the financial benefits that spur large scale movement of population.  Jobs, better economic opportunities, trade and financial benefits are at the crux of such movements.  It can happen from rural to urban areas, or from one nation to another.  Brain drain – the factor that lures some of the best minds away from the country of their origin in pursuit of a better standard of living, has been a classic example for such immigrant activities. Usually such acts are legally authorized – by the host country’s immigration policy and eventually these individuals are absorbed into the Nationality of the host country.  This whole process gets a murky hue when the immigration is illegal.  Individuals through nefarious means end up with in the host country and blend into the local population.  Often times, doing odd jobs and remaining inconspicuous, they manage to hoodwink the authorities and in due time, generate records and start owning property.  One of the oft sidelined issue is the underhandedness of the local administration – be it vote-bank politics or plain monetary corruption, several local authorities or even state administration may encourage such illegal immigration by covert offers in exchange of their support during the elections.  And the end result?

Man, at his basic level, is still an animal.  In that he is very territorial and this concept of territory isn’t only about a geographical demarcation, but also encompasses, his social, emotional and economical boundaries.  And anytime there is a stranger who is laying claim or offering competition on these haloed fields, there is inevitable conflict.  What happened in Assam, is but a manifestation of a the underlying problem of conflict between the immigrants and the local indigenous populace – the Bodos. Kokrajhar one of the prominent places where the riot had its epicenter, had long since been part of what is considered a Bodo-land.

A bit of history here, the British rule had seen many people from the Greater Bengal region (which they eventually bifurcated into East and West Bengal)  brought into Assam in order to work in the rough environments prevalent there.  During their exit, this region (East Bengal) was allocated to Pakistan and marked East Pakistan.  Post independence, India had taken up the cause of East-Pakistan and in the resulting war, ensured the liberation of this region and its subsequent development as Bangladesh.  During this time, there was heavy infiltration into Assam. These immigrants were mostly with an agrarian background and ended up as workers on the field or daily wage earners.  Eventually, they bought plots and lands in these regions and settled in these heartlands.  Needless to say, there was always the seething cauldron of unrest lying underneath – it was an economic and social conflict of interest between the local population and the immigrants.  This led to an agitation by the Bodos demanding for a separate state, since the Central Government had clearly failed in protecting the interests of the indigenous people. They perceived the immigrants as unnecessary competition for an already limited resource available – chiefly the land.  These immigrants were considered to be a primarcy force to ensure power in Assam, given their large numbers, which also explained the apathy of the Government to the demands of the Bodos.  The numbers infact surged since the Indo-Pak war of 1961.  The cause of the localites was taken up by a student organization and soon turned into a violent movement.  A peace accord was finally reached under the prime ministership of Late Rajiv Gandhi.  Accordingly for 10 years, the immigrant population was demarked from being included in the voters list.  This was initially thought to erode the political support for these people.  If they couldn’t vote, they had no discernable use for the political class.  However, this has clearly not solved the problem for the indigenous population.  The claim is that there is continuous infiltration that is happening and given the already existing base of immigrants, more rampant inflow goes unchecked.  This is a major grouse for the Bodos. Killing of members belonging to either of the groups is only a superficial reason, the proverbial nail to the coffin of peace, the true cause however is the festering anger between both the communities.  While the indigenous population may rue the fact that their land is being snatched away, the immigrant population would feel equally outraged at their perpetual state of misery even after years of residence in a region.

India, has often raised a large hue and cry with developed nations whenever laws were made by the countries to tighten the visa norms to prevent extensive immigration/migration of people to their lands.  Everytime there was an attack on Indians settled abroad, Indian Government has made it a point to remind the administration of its duty to ‘protect’ against atrocities and discrimination.  It surely cannot adopt any double standards in the treatment of the immigrants in Assam either.  It is afterall a frankenstein growth fuelled from this very system.  But the recent events must surely ring a warning bell for the state as well as the Central Government – not only the state of Assam, but every state across the country.

In an era of globalization, limiting the movement of people is not an option.  As we saw, there are several factors that drive such behavior and they are far beyond the control of any individual.  It is eventually a priority and right of an individual to sustain his life and livelihood in a manner that does not intrude on another’s right to do so.  Competition however does not believe in such niceties.  It is here that administration shall have to come in to regulate and control the movement so that one does not end up being a threat to the other. 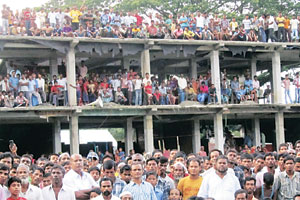 Nature has always ensured this control through various means.  It is high time, the Government too, developed measures to ensure that immigration, especially through illegal means is strictly prohibited and curtailed.  Deporting illegal immigrants is not only necessary to avoid such tensions, but also important for National Security.   There has to be a new line of thinking that can view the people outside of their voter-value, and understand the importance of cultivating their potential and in turn increase the productivity of the resources and the state.  This step requires the assistance of not only a local population but also foreign expertise and support wherever necessary.  This collaborative step will surely help in fostering a co-habitative environment that reduces competition and tension between the groups involved.

The basic needs of food, clothing and shelter is a powerful driving force that can push any individual to extents even he cannot fathom.  By neglecting the immigrant problem, the government of the state of Assam as well as the Central Government has time and again burnt its fingers.  It is a shame that they have not learnt their lessons yet.  It takes a lot of clout and grit to accept the screw up of the past years, and work towards a fix.  Unless the government proactively moves in this direction, they shall only allow the giant to continue to grow, a price that shall again have to be paid through blood.  Use of the military or force can never provide a solution for what is essentially a livelihood and opportunity issue.  This is true for both the Government as well as the residents/citizens.

Instead of coloring the issue in the hue of religion, if the parties involved can try to bring an amicable solution, it shall ensure peace and prosperity that is so rightfully deserved to a state so beautiful and with a rich culture such as Assam.