Indian Cinema is a field of parallels.  We have at one end of the spectrum mediocrity splattered on the screen by the brigade of KJo and the pelvic thrusting oh-am-so-cool-Khan, and at another end, stalwart performers and directors who believe that their audience have sufficient grey matters within the skulls intact. Their movies do not mock but respect the dignity of relationships, they do not overkill on the emotion, but bring a whiff of freshness and celebrate the spirit of being human, in all its pitfalls and glories.  This brigade, more often than not, has consisted of new faces and hidden talents, without the power of big banners or mega stars flaunting behind them and thankfully their movies go easy on the designer labels and main protagonists do not jump off helicopters for family ceremonies.  Director Sanjoy Nag has indeed worked such a wonder through his movie – Memories in March.  Though I had watched this movie last year, and had intended to write a review then, unfortunately my lethargy outsmarted me and it was put in the freeze, till recently when I happened to hear the soul stirring songs from this movie, and before long, here I am, penning my candid feelings about a movie that is a must dekko.  (Statutory warning: Spoilers ahead!)

Aarti Mishra’s (Deepti Naval) world is turned upside down as she learns of the death of her only son – Siddharth in an accident.  A divorcee, she is crestfallen and arrives to Kolkata to face the most poignant moment of her life.  As she begins the painful process of coming to terms with the reality, she is helped by her son’s colleague Shahana (Raima Sen).  Aarti stays at her son’s apartment and relives the memories of her son, ardently missing his presence and feeling like a stranger in his apartment.  When she visits his office to collect Siddharth’s personal belongings, she is stopped by the Manager, who politely informs that she’ll receive the belongings later at her residence.  Intrigued and suspecting a foul play, she confronts the manager Arnab (Rituparno Ghosh)  and Shahana only to realize that there was a facet of her son’s life that she was hitherto oblivious to – his sexual orientation.  She breaks down on learning of his relationship with Arnab.  The movie traverses through the warm memories the three protagonists of the movie – Arnab, Aarti and Shahana hold of their dear one, and how the tragedy of losing him, brings them close.  They learn to come to terms with the loss, and accept life and move on, in the process forging a new relationship of trust and friendship between them.  Just as in the movie, Siddharth remains in the minds of the viewers as just a voice, who acquaints himself to us through his voice and letters.

Memories in March, is a movie that is human in every sense of the word.  Dealing with alternate sexuality and portraying the intricacies of its acceptance by a mother is no small task, especially of a mother who has to deal with not only her son’s death but also his orientation.  But the movie excels in this attempt, but not glorifying the tragedy, but by 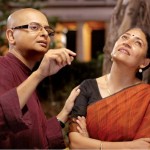 letting the characters accept the inevitable naturally.  The confrontation between Arnab and Aarti, the guilt and the blame, each facet of coming to terms, has been brilliantly captured.  The audience are not tortured by unwanted melodrama, but sensitized and gently led down the path of a natural process of grieving and healing.  Several moments in the movie, such as Aarti and Arnab revisiting the site of accident, discussing Siddharth’s habits, or debating homosexuality and its righteousness are so natural in their development, that it only seems baffling that it is indeed part of a movie, and not a real life docu-drama.  It is this simplicity that leaves an ever-lasting memory in the mind of the viewer, making this movie far superior in class and taste than many of the ‘commercial’ hogwash, with technological crap cast on the silver screen.

Deepti Naval is outstanding by her exemplary performance in this movie.  Raima sen has great camera presence and ofcourse does justice to her supporting role.  Rituparno Ghosh, probably not being a professional actor, stands out in an odd way.  While he seems comfortable in some scenes, its the tragic parts of the movie that shows his acting skills to be wanting.  While in general, the acting, screenplay and direction in the movie are deservedly noteworthy, it is the music that ultimately nails the movie permanently into a sensitive viewer’s heart.  The songs are exquisite and hand picked to stir the strings of the soul and tune the heart to beat to the ebbs and rises of sorrow and joy that spread like a soothing ripple across the movie. Shubhomita who has lent her voice for the songs, is a name to reckon with.  I am so smitten by the soulness of her songs that they’ve been endlessly played all night!  Songs like “Mere lala aaj na jaiyo yamuna ke paar”, and “Badi Manaratha” bring to fore the pent up tears and yet, ring with dignity – like a lover silently suffering the pangs of separation, lest the histrionics may cast a double spell of more misery!  The music by Debjyoti Mishra doesn’t overtake the singer but lends a helpful hand in the background.  Listen to the songs, and I can vouch that somewhere in between, the breathing shall get shallow, and there is a heavy silence that fills the air.  The viewer is also made to face those poignant memories and realize that healing is inevitable.

The characters of Aarti & Arnab are facets that live inside us.  We own our relationships and our memories, treating them with an exquisitiveness that is felt to be our sole property.  But unknown to us, or unacknowledged, the roots of human connectedness spreads far and wide.  Friends, lovers, relatives, and us too, don various roles and spread across the horizon.  None of us can ever assimilate all these memories, but we can certainly share them.  This is the most personal aspect of ourselves that we can always give back to everyone who come to our lives – memories.  If we can strive to keep those memories pleasant and happy, it may indeed make our temporary stay here, worthwhile.  Memories in March, is a movie that is not only a must see, but a must have in every avid movie lover’s collection.