The Academy Awards have come and gone. Personally, the highlight was Meryl Streep. I would’ve hurled every known curse on the committee if they had omitted Meryl this year.  She is one splendid actress, who should’ve broken the record for winning highest number of Oscar Awards by now, but for the ineptitude of the people who vote in these categories! But justice has been done and surely I hope her remark that she’d “not be here again” shall prove be false in the coming years.  Well, having said so much, I guess it was already a bygone conclusion that I’d watch the Iron Lady as soon as it released in India. And finally it did, with the splendid halo of the Oscar Award behind it! And ofcourse the esteemed self went to the movie, where his highness and his troop of friends had gallantly booked an entire row of seats.  We are hardcore fans of the lady! Now to the movie.

The Iron Lady, as the world already knows is a bio-pic about Mrs. Margaret Thatcher, the longest serving and the only woman prime minister of Britain.  To fall back on a bit of history, Mrs. Margaret Thatcher presided over some of the most glorious as well as tumultous years of England. The post World war II Britain was seething with a paralysed 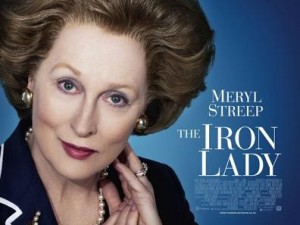 economy and growing power of the Worker’s Union, which was constantly at logger heads with the administration. When the Labor party was struck down in 1979, the then leader of Conservatives, Margaret Thatcher became the first woman prime minister of Britain and took several measures to stabilise the economy (such as privatization and cost cutting measures) and also undermine the growing clout of the trade unions. The war with Argentina, over the Falkland Islands, and the subsequent victory launched her to her 2nd innings as the Prime Minister, during which tenure she further tried to tighten the clamps around the Union leaders and brought in a slew of measures tightening the public spending and levying new taxes.  With growing discontentment within the party and outside of it, her leadership was challenged, eventually leading to her resignation from the post of Prime Minister, during her third consecutive victory in elections and 11th year of her tenure.

To play the role of a lady who sternly crushed down not only the male dominated politics of British Parliament but took on a hostile economy, under the cloud of cold-war, is no laughing matter.  And it is just for this reason that none but Meryl Streep could’ve essayed it with the brilliance and justification it demands.  The character of Margaret Thatcher as shown in the movie, isn’t one of the woman who was indeed the Iron Lady, but more of a human being coming to terms with the loss of her husband and her dementia.  The starting scene of her buying a carton of milk, unrecognized by the public sets the tone and stage for a brilliant movie that unravels, in the same way that the character reminiscences her life – the rise of a grocer’s daughter to the most coveted position in British politics. Meryl nails with perfection the emotions of the protagonist, and the tug of war between the reality and imagination – the reality about her personal and political life, with her imagination of it.  The movie toggles between her towering success to her detrimental health, but somewhere the emphasis seems to be laid more on her present condition and portraying the humane side to someone who has long been seen as a ruthless leader.  One of the challenges about making a biographical movie is with the authenticity of the presentation.  The protagonist character can always be shown in several views.  The most heinous of the characters are shown to be humane in some corner of their heart. That is the creative liberty that is vested as the previlege of artists and those in creative fields. While I am not an authority to truly express my views on Mrs. Margaret Thatcher, I certainly can vouchsafe for Meryl Streep. This movie entirely belongs to her and the sheer brilliance of her performance.  The viewer can feel how perfectly Meryl has owned the character of Mrs. Thatcher.  Several poignant scenes moved me to tears.  But it had more to do with the portrayal of it, than the character.  That is the brilliance of an artist such as Meryl.  She has once again floored me and I cannot but bow my head in sheer admiration to this treasure house of talent, that my generation can boast of seeing in person! The movie is directed by Phyllida Lloyd.

One of the best trailer of this movie from youtube: Official Trailer

Well, the same evening, I watched yet another movie that made waves in the 2012 Academy Awards – The Help.

The Help is a movie set in the midst of the Civil Rights Movement in America.  The mid-west region and the Southern American regions took a long time to come to 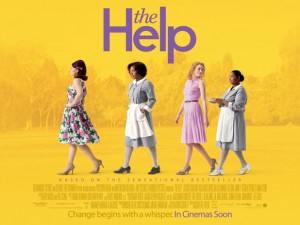 terms or even agree to the scope of Civil Liberties to the colored people.  The movie set in Mississippi is the tale of a group of ladies – African American, working as domestic help in the houses of the white females.  It is a tale of their relationships and the tribulations they put up with, documented by a sympathetic white female wanna-be writer -Eugenia Skeeter.  The roles of the 2 main colored domestic help – Aibileen and Minny have been essayed by the brilliant Viola Davis and Octavia Spencer respectively.  Eugenia Skeeter, s a college grad hoping to make it big as a writer and takes up the task of writing a book bringing out a view of the American family through the eyes of their domestic helpers.  In a society that applauded racial discrimination and even deemed it essential, this effort though initially met with trepidation, is eventually supported by several Black domestic helpers.  The killing of the Civil Rights movement activist Mr. Medgar Evers also forms a rallying point to them, as the movie progresses.  What is then revealed is an intimate account of the pain and suffering experienced by the helps, and also exposes the sheer hypocrism and hollowness of the social belief system prevalent at that time.  All is not black and white, for many supporting characters are shown empathetic to the cause or treating the colored population as equals, with respect and dignity.  It is a warm movie that prods us to question ourselves whether we do, or do not practise racial discrimination in whatever minute scales even after decades of awareness and education.  The proportions may not be as radical as building separate toilets for the colored help and insisting they use only that, but somewhere in our subconscious, we are biased or prejudiced about people who are different from us – skin color, sexual orientation, citizenship and gender; whatever may be the reason, much as we celebrate the variety in nature, the human psyche does abhor it.  The movie shows strength and resilience in the face of dire circumstances and hope of a new beginning even as some tender relationships are brought to a disturbing end.  All of this, with a touch of humor! 🙂

Viola Davis is an actor to look out for, and it is not too far a time, before she shall win for herself an Academy Award. She already has 2 nominations – one as a supporting role (for her mind-blowing performance in “The Doubt”) and another as a lead role (for The Help) and shall soon be carrying the golden guy home.  Octavia Spencer who won the Academy Award for Best Supporting Actress has given a stupendous performance.  As the straight-talking maid who doesn’t back off from baking a not-to-be-named chocolate pie to her irritatingly wicked Mistress, Octavia Spencer walked her way to the wall of fame, and bagged her very first nomination as well as Award at the Oscars.  The movie is a must watch indeed.  It is fast paced, and aesthetically handled with respect to the script and narration. The tense moments of Mr. Medgar’s assassination, the social stigma attached to the colored people and their treatment in the society at large are all brilliantly captured.  Some characters do seem quite out of place and even redundant like that of Skeeter’s love interest.  The movie could’ve done more justice to showcasing the cause of the Civil Rights movement, but may have had to barter with the humor.  Somewhere, the humor does seem to dilute the essence of the movie, but it is the sheer brilliance of acting that brings out the dormant emotions to lime light and succeeds in keeping it there. The movie is based on a novel by Kathryn Stockett.  It has been directed by Tate Taylor.