Ramblings on the way home….

Here’s a billion dollar question. Who is the jerk that came up with the design for the Indian Passport Website? www.passportindia.gov.in, if anything is just another huge pain in the posterior.  It is ridiculous to think of the pain a legal citizen of this country has to go through to get a passport renewed. I had held myself back from writing a scathing post a few months ago about this issue, but going through the harrowing experience of renewing the passport has only augmented the hatred that was building up against the process that has been put in place and also against the enterprise that is maintaining the web interface.

Sure, India is being ruled by a bunch of fuck-ups (and am not talking of only the ruling party, it very much includes the opposition too) and it only shows how determined they are in screwing up the citizens of this country.  While it is not sufficient that they siphon of vulgarly huge amount of moolah, they want to extract a savage happiness out of the inconvenience meted out to common man to access some of his most principle and rightful services & needs.

If there ever was an example for a perfectly good idea being messed up because of the sheer idiocy of the system, then our passport system would be a wonderful specimen to be considered for this. Sure, there are many contenders in India at the moment, but then, for me, this holds the spotlight. So there! 😛

God forbid but if you ever have to renew your sorry passport or get a new one, under the dreamy eyes of ever having to fly out of country on a “phoren” “assignmentu”, then ensure that you’ll get out of Bangalore and revise your records to reflect that you are residing in a different city, heck a different state altogether!

So what’s my point of grouse you ask? Its either me, or every freakin’ person in Bangalore is traveling abroad and is traveling in the next one month! For the past 15 days, I’ve had the glorious opportunity to be logging in every day at precisely 9:45 AM (because that’s when I am able to reach office, though I leave home at 8:15 AM) and realize that there are no appointments available in the 2 PSKs (Passport Seva Kendra a.k.a Pesky Seva Kendra a.k.a Pathetically Sadistic Whatever-the-hell-of-a-Kendra) of Bangalore. Somehow magically everyday, between 9:00 AM & 9:45 AM ALL the available slots for the day one month later gets filled up.  It is really interesting that every day, we have the exact number of people logging in at precisely the same time and exhausting all the available slots that too one month in advance!  Sherlock Holmes would’ve smoked away to his death without being able to resolve this mystery! Well, being the logically oriented lot that we Indians are, am sure you’d tell me that I should’ve managed to login precisely at 9:00 AM or even before and then try to book the appointment.  Pffttt! So what happens when our esteemed self logs in at 9:00 AM?! The page throws a blank! Apparently TCS doesn’t have enough servers to support the traffic, or the great esteemed Government of India, just doesn’t bother to pay TCS well enough for the maintenance of the website.

Sure India is a country teeming with techies and brain whizkids of the world, who are phenomenally great in “servicing” products for other countries. We are a bunch of people who take great pride to let the world know that we do the maintenance of great many softwares for them, and even compete with eachother for an opportunity to go “onsite” and serve.  But talk about developing a user-friendly application for home use! And it raises a stink that can send a bean-fart for cover!

The website for the Passport application is anything but userfriendly.  It is not that I did not have the opportunity for booking an appointment.  Nearly 3 months ago, I did manage to get the appointment and even visited the PSK for the renewal of the passport. The website listed the documents that were needed for the renewal and when I presented them there, the chap unceremoniously dismissed them quoting another document that was NOT listed on the website.  Now mind you, that I had even called the so called “customer service” number listed on the website, only to be told that the documents on the website was sufficient and would ensure the renewal. But apparently, the shots are being called by someone else inside the office, and surely he does wear the pants! The lack of information being one of the issues, the design and usability testing for the website is far from satisfactory!  One wonders, what sort of idea an IT major such as TCS which boasts itself of great customer satisfaction and service record, had in mind when even reviewing this! Are they so phenomenally dumb that they couldn’t grasp the simplest of the facts about what an end-user would want to experience?!  I feel, a bunch of disgruntled guys, who hadn’t got an onsite-opportunity designed this portal and are maintaining it.

I fail to understand the logic for opening the booking window for exactly one day in advance! If I am not able to book the slots for 6th June, why shouldn’t I be able to book one for 7th today?!! Would it make sense for a person to be trying everyday to book at 9:00 AM, causing the server to crash unable to hold the traffic.

I just fail to understand that a country which is a seething cauldron of IT bigwigs, has a pedestrian interface and design for the government websites. Many a times, the certificate for the session that is opened is lost mid-way, and the user is asked to relogin again and again to the passport website.  Legitimate passwords are lost, and I have been left wondering if there is an expiry period for the password or if something went wrong! If the security features for a critical website such as the one containing our passport related details are so poor, what security are we looking at for our protection?!  Maybe am blowing matters out of proportion, or maybe I am just venting out a lot of frustration, but accessibility for services is not a light matter atleast IMHO.

As a country, we have been complacent towards the governance.  We have resigned to the fact that our politicians are rogues, and rowdies, criminals and dirty scoundrels.  Sure they are all of that!  But who is stopping us from bringing about a change?  Who has stopped us from voting against these same sterile and incompetent eunuchs to power or preventing them from ransacking a country of its glory?!!  I know this is rhetoric.  Flushing out a shit that has accumulated in our system since decades due to our negligence and complacency is not an over-night, one blog-post task…….

P.S:- Interestingly enough, though there is a provision for online submission of the form, each time you fill it out and hit the “submit” button, a sweet technical snag appears out of nowhere and the submission never happens (Also, the error codes seem to change each time the submit button is hit!!!!!). Well, do you care to save the form in between so you don’t have to refill it all through once again?!! You imbecile fool you! Ofcourse even then the technical snag pops out like the Jack-in-the-box. Surely the joke’s on us! Thank you Govt. of India/Ministry of External (sucking) affairs & TCS! Go soak your head in a bucket of water for me please! 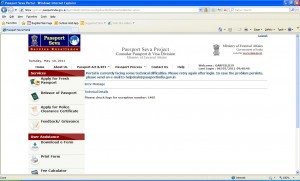 The pain of submission