Ramblings on the way home….

Its been really a long time since I wrote about movies! And boy have I been watching them! Ok! Candid confession. I LOVE ANIMATIONS! (Phew! glad I got that out!). No, seriously! I could survive a whole year watching animaged flicks!  I can put out a huge list of my favorite animated movies, and never be done with it, since I’d only continue to add on to them. But anyways, enough of the blah….. blah…. blah …
Warning: Potential spoilers ahead……. 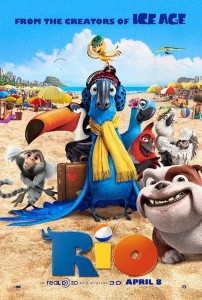 Oh! watched Rio finally and giggled my way all through the movie. But then, as all my buddies know, the threshold of my humor is rather low, and so it wouldn’t really amuse them if I was all wide smiles throughout the show. But in all fairness, Rio is quite a dekko, and for more reasons than one.

So…what do we have in this carnival?!! There’s Blu – a flightless sphix Macaw, and there’s Jewel a feisty sphix Macaw a.k.a female love interest!  The sublime plot of protecting endangered birds from extinction and preserving their species, and warding off the bloody smugglers has been intertwined with the quintessential love plot.  Blu is the only surviving male of the species and has to urgently mate with a female in order to escape extinction! (Are we already seeing traces of Ice Age 2 here?! Well! Its from their makers ofcourse!).  Err.. so what’s the problem you say? To begin with, Blu is a domesticated bird, and he doesn’t know how to fly!!! While Jewel has been a wild forest bred bird, who treasures her freedom and wants to get back to the wild. Into this cauldron add a smuggler with his dubious and fiendish side-kick (with his own sob-story of the past) bird – a sulphur crested cuckatoo, Linda the human who owns Blu, Tulio – the bird scientist obsessed with preserving the species of the sphix Macaw, the whole entourage of flora and fauna of Rio helping Blu win his lady-love, and not to forget – the rabidly drooling bull dog, Luiz, and the splendidly colorful Carnival of Rio and Voila! you’ve a scrumptuous 2 hour long colorful extravaganza splashed on the screen in 3D!  The ending is anybody’s guess! So let’s not get into it.

The movie by itself seems inspired by many cult movies.  One finds the trace of “Finding Nemo” in the opening shots of when the baby Blu is kidnapped from the forest, and lost on the streets of Minnesota, only to be adopted by Linda with the promise that “I’d never let anything happen to you!”.  The most uplifting aspect of the movie, in my opinion shall be the rampage of colors that it showers on the viewers. The beauty and splendor of Rio and its forests and the exquisite birds that they house, has been brought to full life and the 3D experience only serves as the icing on the cake.

The film is littered with wit, humor and a hint of sheer grossness – drooling dog?! Seriously?! But that’s bearable. The spectacle of the carnival is a pleasure for the eyes! The movie at times borders on too much dramatisation but one tends to forgive it, as they do become quintessential. Sequences of Blu trying to get over his fear of flight, the villainous Cuckatoo, and the fights between Blu & Jewel ring of our good ol’ desi inspirations.

The other highlight is ofcourse the music! Its Rio-ed all the way! Coupled with the colorful display that is brought to the forefront, it leaves the experience thoroughly refreshing. All said and done, Rio, with its laudable theme of conservation, doesn’t really offer anything innovative or path breaking in terms of the story line. But what it lacks in story, it more than makes up with the razzle-dazzle.  Kids will no doubt enjoy the show.  And adults, well, if we still don’t grow up to protect the treasure house of flora and fauna, we’d be left with caricatures and animations to show to future generations.

On that note, all i can say is, its worth a watch. And just one! 🙂  Oh, double it up with a bucket of butter popcorn and enjoy the colors of Rio!