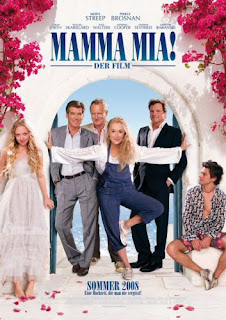 Please Note:- Spoilers ahead! (T)read carefully!! (Not that it really matters ya know! 😉)
3 middle age … well not really, rather…… post middle age women, and 3 similar men, a young couple who believe that they are the wonderland Atlantians prancing around in a Greek Land and a whole cohort of similar Greeks! Add to this concoction a whole range of ABBA numbers from their famous musicals and pronto – you’ve got MAMMA MIA! So what went wrong with it? Just one small fact that the movie has come nearly a decade or two late! And that is only the beginning!
ABBA has been my favorite music band ever since childhood. Growing up listening to “Dancing Queen“, “Chiquitita“, “SOS“, and craving for “Money Money Money” has become such an integral part of my identification with my childhood. So when Universal Studios teamed up with couple of other productions and came up with the idea to bring their world-famous musical to screen, with a conglomeration of Producers which has Tom Hanks (My Favorite) in them too and a star cast that includes the fabulous Meryl Streep (Another of my top favorites) in the lead, that was too awesome for me to resist! Eagerly had I waited for it to hit the screens. Nagging reviews not withstanding, I rushed forth and sure enough obtained my share of disappointments. Comeon Hollywood!! Even a Bollywood dishout wouldn’t have been so! (Or then again….maybe they’d have screwed it up even worse!) Sigh!
Sophie (Amanda Seyfried) is about to get married to her boyfriend (Dominic Cooper). But she has a long standing dream of hers to have her father give her away. The problem with this? She doesn’t know who her father is! Momma Donna (Meryl Streep..as sweet as ever) apparently was rather playful one spring!! But the snoopy lil creatures that teenage girls usually are, she discovers that there are 3 possible men who could’ve fathered her, and so sends out letters to all three inviting them for her wedding. Whatever happened to decency, I wonder?!! And sure enough the 3 males land in the island of Kalokairi – Pierce Brosnan, Stellan Skarsgard and Colin Firth! Along with them land the girls of Sophie and Donna! You have to see to believe their team 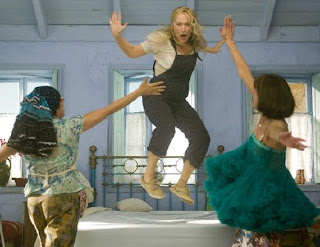 cheer! Well what follows along is a typical chick-fare replete with songs, yells, shrill cries, and the usual ‘girl moments’ (whatever that is supposed to be) talking about true love!!! errrrm…..yeah in case u didn’t know Kalokairi is the place where anyone who wants true love should go and drink water from!! (Now u tell me!! After spending a decade looking for one! Sheesh!! Why is it that I always come to know it when I have outgrown it!). Like they say the best (or in this case the worst) was indeed saved for the last! I had a is-this-really-happening look on my face for when the movie ends (or so we think) we have the lead casts strutting back on screen in pink bell bottoms and hay-wire attires singing “Waterloo” and “Dancing Queen” once again!
In all fairness to the movie, you can really feel the vibe amongst the actors! I mean, comeon guys (and gals) its ABBA music we are talking about! Who wouldn’t wanna dance and tap their feet to them! But err… you know… all said and done, to watch oldie Julie Waters and Christine Baranski cracking slapstick jokes about nights with men and sticking protrusions in btw their pants… errrr… its just not what I’m built up to watch! Sure the songs have been tweaked around.. “Does your mother know” isn’t about a girl but a guy here hitting on Christine Baranski! To have the leads and the characters sing out the numbers was probably the biggest disappointment! At this age, well, they really cannot do justice for the zest and vigor that the numbers of ABBA call for!
Meryl Streep is as fresh and full of life as ever! Here is one talented actress who can bring down a whole legion of actresses to their feet in front of her! The diva as always! Some numbers rendered by her is quite good! Though sometimes, in some numbers such as Mamma Mia she does seem a lil over-doing it… but she does eventually add her own charm into the whole movie! She’s the only reason I went ahead and bought the VCD. Julie Waters is absolutely forgettable (she gets to sing Take a chance on me) and Christine Baranski did a passable job on “Does your mother you”. The crew could’ve certainly done a better job in covering the island’s beauty. A movie completely shot on a Greek island had totally raised my expectations on the camera work. But it was majorly focussed on the wedding cast.. than the wedding place.
Well all said and done, I can’t deny one thing. I was all smiles throughout the movie. And no not because of the way it was, but having realized that the movie wasn’t really worth paying attention to, my mind had already drifted back to the days of the yore – when wearing shorts was something that nobody really cared about! Well.. if you are as die-hard fan of ABBA and Meryl Streep as I am…. guess it wouldn’t hurt to watch this movie! 🙂
And before I leave.. buddies.. take care of one more thing.. no matter of expensive it may be…. buy a DVD or VCD that is not BIG Home Video in the make. Watching the movie on the Reliance made VCD is a pain! oh yeah! BIG Home Video –> you suck! Please don’t produce movie VCDs! Thank you!
Overall Rating: 3.0/5.0