An Evening with Mandolin Srinivas 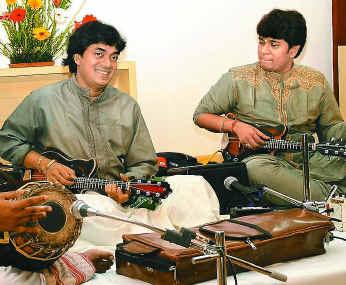 30th April was a Sunday, unlike the others! What started as yeddanoder normal day, took a U Turn by the afternoon, when a friend of mine (bless his heart), came with the surprising news that Mandolin U Srinivas was performing in Wichita that evening! Now I will save you all the pain of having to hear/read about the multitudinous levels of ecstasy, I felt upon hearing it. Suffice it to say, it was up for grabs, and I’d have gone out on a limb for it! Then came the arduous task of having to wait the painful 6 hrs! The program was due to start at 7 PM at the Twentieth Century Hall in Wichita.
I knew that the evening would be anything but ordinary! And so it was! It had an ‘extra’ appended to it in the fore front! Me and my friend were there right on time.
U Srinivas was accompanied by his brother U Rajesh, and percussionists – Sri Muruga Bhoopathy on Mridangam and Sri Ramani on Ghatam. The concert began with a varNa, soon to be followed by his famous rendition of Sri Muttuswamy Dikshitar’s kRuti “vAtApi gaNapatim bhajE” in hamsadhwani raaga, set to Adi taaLa. It was followed by a few kRuti’s of Sri Tyagaraja – “Sobillu saptaswara” (in jaganmohini raaga, rUpaka taaLa), “marugElara O rAghava”, for which the alaapana in between featured a mesmerizing jugalbandi between Srinivas and Rajesh. This was followed by a 20 mins break.
The concert resumed with an enthralling rendition of “Saamajavaragamana” (raaga hindOLa, Adi taaLa), that featured an almost 20 mins rendition of jugal bandi between all the instrumentalists! Sri Ramani and Sri Muruga Bhoopathy were clearly the stars of this part! One could not help but notice the mellifluous partnership between all the players. The experience of listening to it, can never be summarized in mundane words of limited expressions and meanings! The other kRuti’s played included a Sai bhajan, Annamayya’s keertane – “Brahmamokkate (tandanaana bhala)”, “Siva hara chandrashekhara”, and finally a tillana.
There are no words to describe the talent vested in Srinivas. Clearly, his brother Rajesh is not to be counted less in any way! Infact, it was Rajesh’s instrument that sounded better than Srinivas’ all through the concert! But then, the playing was equally matched between the two. The percussionists only amplified the aura of an already shining performance! The sound quality did suffer a bit in the later part of the concert, but was soon rectified.
Apart from the omniscient irritability of Indian audiences’ apathy towards fine art, the poor propaganda given for the event was an cause for personal ruse! Occassional noises of cell phones ringing held a mirror for the etiquette those persons held! Well let’s not get into that!
After a wonderful 2 hours of divine music, the small rendezvous with them in person, left me humbled! Finding an artist of his stature, to be so humble, and down to earth, only showed the shallowness in us and again went to prove the greatness of an art like music! It was a moment of personal satisfaction, coupled with divine experience!