Why Soliloquies in Hiding?

The End Of An Epic Figure! 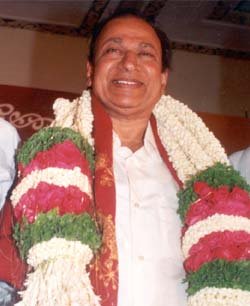 It is a rude way to wake up in the morning, and learn the first thing that someone who was a part of your life, is no more. It isn’t a new news at this hour! I am sure, the kannadigas world wide, are already aware that Dr. Rajkumar, so lovingly addressed as “aNNAvru” is no more. He passed away on the 12th of April, around 2:15 PM IST.
Glowing tributes have been written, his accomplishments have been listed, praised, and his death has been described as a void, that will never be filled. It is all of that, and so much more that its impossible to be bounded within the realms of vocabulary. Am I being over-emotional? I do not want to judge my feelings for him. They are what they are! Over or under!
To say that I grew up with Dr. Rajkumar isn’t an exaggeration. I do not remember the first movie of Dr. Rajkumar that I saw. But I do remember that ever since I was a kid, I would look forward for his movies. When I’d stand to pose for a camera, inevitably, my posture would be one of his, elegantly lifted off of the posters, that I’d stare at in awe! I remember how eagerly I’d await the return of my father from his work on Fridays, when the movies would be released, and I knew for sure, that he would have the tickets for Dr. Raj’s movies at Navrang Theatre, in Rajajinagar. I’d then gloat in front of my friends from the neighborhood of how, we are going to see his movie that very evening! And what would follow after that, was a meeting of all my friends, on the terrace of my house. I’d relate the story, enact it at some points, say the key dialogues with equal fervour… my heart filled with a sense of pride! I am emulating Dr. Rajkumar’s acting!
I remember the multitude of songs I learnt by heart, to beat my brother! We would compete with eachother, in by hearting as many songs of his as possible, in collecting as many stickers of Dr. Rajkumar, in learning his dialogues, as to who was a greater fan of him! That is how integrated my childhood was with his persona. His demise, brings back all those memories and they are dear to me. He was a part of that dearness.
I remember my eyes wide open in awe, watching him in the royal roles of Kings long gone, of whose wonders we cud only read in books! I remember my eyes wet with tears, looking at his laments as Bhakta Kumbaara! I remember these very eyes looking up in admiration for his roles as the brave police officer, the do gooder, the farmer, the innocent young boy, the give-all, the altruist, the lover, the revolutionary!
How can I forget the dynamic dialogues of his that won me the first place in mono-acting- “naanu yaaru? kashyapa brahmana maga…chaturmuKa brahmana mommaga. hari hara brahmaadigaLE aDDa baMdarU naDugisuva, graha taaregaLE dikkApAlaagi ODuvante maaDuva, indra, varuNa, vaayu, agnigaLannE nanna dAsarannAgisikoMDiruva I hiraNya kaShyapuvina vaMSadalli huTTida ee kunni, nannedurigE nanna vairiyaada aa hariyannu smaraNe maaDuvaShTu uddhaTatanavE!!!!“.
Having come so far off from my home, my state, and staying in a foreign nation, when the heart yearns for some memories of the past, I watch his movies. My mind runs back to the streets of Rajajinagar and the terrace of our house. I shall continue to do so, but there shall be a difference. A haunting thought, that a person who in his own special way, was a part of my childhood, is now not present physically. I know the tunes of the jazz that go, he will always be present in his work.. and blah blah blah blah.. but its a fact that things won’t be the same. There are very few dignitaries whose death as I lived, really shook me personally – Mother Theresa, Smt. M S Subbulakshmi, and now it is Dr. Rajkumar.
Can words eulogize his death? I do not want to do that! I will miss him, I know that. So shall millions of his fans world wide. All said and done, he was an epic in himself, so humble, and so earthly, that sometimes, I would wonder, if it is at all possible for a star to have his foot on the earth as he did! It was all just so surreal! It was a wonder, a puzzle! I get carried away so much with even miniscule of my achievements, and yet, this person, remained so rooted to his identity as a simple human being! I guess thatz the aspect of his, that I shall remember forever. Bless his soul! I am gonna miss you aNNAvre.