“Born Into Brothels” – Of Hopes and Dreams! 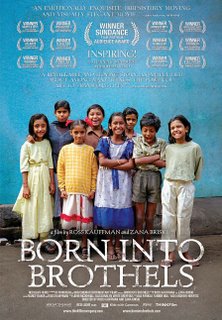 It’s been about 10 mins past since I turned off the DVD Player. Had been watching a documentary movie – “Born into Brothels – Calcutta’s Red Light Kids”. Let me give you all the introductory information regarding this movie. It won the Oscar Awards for best documentary in the year 2005, apart from 12 other awards in various prestigious ceremonies all over the world. This movie is directed by Zana Briski and Ross Kauffman. The movie is about the life of the children of prostitutes in Sonagachi – the Red Light area in Calcutta.

There are a set of people who usually object to such movies on the grounds that the Western movie makers seem to be only interested in showcasing the rotting and debilitating aspects of India, rather than show her development and progress on the World Frontier. This aspect is something that I do not even consider worth dealing with in this post at this time. So if there is any wish of bringing that up here, you are welcome to close the browser!
The documentary starts with the director coming to the brothel as a teacher of photography, and handing each kid a camera, and showing them how to shoot photographs. What unveils next is a gentle bonding between the director and a group of children, that takes the viewers to the most sensitive details of their lives! The director’s fight with the local system, families of the children, and the government to get the children a better life, by getting them admitted to a boarding school, even exhibiting their photographs in an exhibition abroad, and giving an opportunity for a kid in the brothel to travel abroad, the eventualities of the children in the end, is what the movie is all about in terms of the story. The effect is verbally immeasurable!
There are a genre of movies that portray vividly the disdain experienced by the downtrodden in all its stark nakedness that makes one steal views, or turn heads! But this movie unlike them, does not leave you with a pain in the heart. It leaves you with hope, and dream, like that of those children – a better tomorrow, a better life! Shanti, Avijit, Suchitra, Manik, Tapasi, Pooja, Kochi, these are children who for some reason go through the travails of abuse every day! There is a moment when the kids are tested for being HIV +ve, when the heart stands still! The dread of becoming one “with the line”, is starkly visible in the eyes of the kids! And yet when one hears them sing joyfully on their way to the zoo, see them playing with wanton abandon in the waters of the beach, invariably the lips trace a curve. Such is the magic of their spirits, that fights undaunted, the hypocrism and abuse of the so called developed society!
This movie is a must watch. The subject is reason enough. If one is in the habit of cribbing, complaining, and exhaling mounds of long drawn sighs at the unjust life, take a break, and watch this movie. It’s a shame, we lack their spirits! The best thing? They give us a part of their own! Adios!