Whose Tag is it Anyway!! 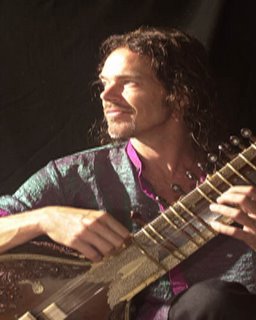 Fusion music – is not about just mixing two different styles of music together, it is a very delicate interleaving of the two with neither of them losing its identity individually, but yet on the whole appear in a different pattern of waves that seep through you and reverberate deep within the heart and mind! It is about blending cultures without offending any of the primary components, and as such is far more challenging in the musical world. There has been experimentation on using different instruments for different styles of music. Pt. Vishwamohan Bhatt, who won the Grammys speared the use of Hawaiin Guitar for Classical traditional styles! But there is a group of people class apart from the usuals, who have a passion for experimenting in different styles/traditions of music across the world and bringing them together. And when it comes to blending Eastern, and more so Indian Music with the Western, the one name that stands out all by itself is that of Prem Joshua.
Prem Joshua was born in Germany and took to music at a very young age, and started experimenting in many contemporary styles of West – Rock, Jazz, and fusion. His unsatiable quest and spiritual inquisition soon brought him to India – the place where he (in his own words) felt “instantly at home”. By then he had also studied the Islamic music, as well as been to Greece, Turkey, Iran and Afghanistan. He had once heard a CD of Ravi Shankar, and that instantly transformed him. To him, that music gave him one of the most ethereal, and divine experience he had ever felt. Well before long, he did win the accolades from the master himself as well as his daughter Anoushka. Prem’s teacher was Maestro Ustad Usman Khan. He even plays flute, Sax, guitar, tabla, drums, bass and several other instruments. His many albums vividly put to tune several Sanskrit and Sufi hymns. The stand alone factor is nevertheless the music that portrays the main style presented in the album – be it sufi, or tantric, or the soothing meditative style. His albums include “The Dance of Shakti”, “Water down the Ganges”, “Shiva Moon”, “Dakini Lounge”, “No Goal but the path”, “Tribal gathering” and few others. What strikes me the most in his music is the distinct sounds that he produces, some of them rather weird, by using a medley of familiar instruments!! His combination of the acoustical effects and the infusion of words in between give a transcendental feeling to the listener.
Prem Joshua continues to tour the World over, giving his mesmerizing performances to the growing number of fusion enthusiasts accompanied by a highly complementary band of musicians and performers.