So you guyz already know what this is all about! Yeah! Watched 2 movies tonite! “Rang De Basanti” and “Main Meri Patni Aur Woh“. Both the movies were drastically varied in many ways, but yet provided quite a wholesome entertainment! And here I am, providing a review of both, as per my tastes, and interests! 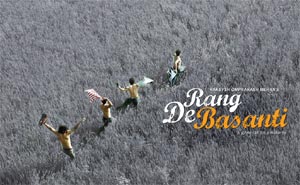 Rang De Basanti :- The story of the young generation that is awakened to the condition of the country by embarking on a journey through the history of freedom struggle, sounded extremely promising! Indeed the first half kept the spirits alive, only to be hastily put down by the second! Disappointing? To a certain extent.. yes! Was it the hype the media created? Or was it the way the first half of the movie portrays itself to be? Or is it something that my personal perception is finding hard to digest? I dunno! I felt that the movie did not do justice to what otherwise was an excellent story line!
Ups of the movie :- The par excellence acting by all the actors! The music scored by A R Rahman, the beautiful locales chosen for the picturization, and the innovativeness of the idea. The portrayal of the gradual change in the outlook of the main characters has been well handled, not to mention the interleaved sequences of the freedom struggle. All the main characters have excelled in their performances. Soha Ali khan has given a wonderful performance considering this to be her first movie!
Downs of the movie :- The dramatization of the events, which is far from truth, even in the present India! That the goverment would storm the Akashvani building with Black commandos to kill the college students, who are on air confessing their crimes and exposing the reasons behind it is quite hard to digest, let alone the portrayal of the police beating up a peaceful candle light vigilance. Ace actors and actresses like Waheeda Rehman, Kiron Kher, Anupam Kher and Om puri are wasted in very small roles! Though, they have all rendered their roles wonderfully well, there could have been more room provided for those characters! The parallel drawn between the main characters and the freedom fighters too seemed a tad over cooked! To say that they were influenced by them, is one thing! But then to compare their acts with the freedom struggle did not really seem convincing! With all due respects to his acting prowess, Aamir seemed out of the group amidst all the young actors!
Overall view :- I’d certainly recommend everyone to watch this movie. It is fresh as far as its idea is concerned. But I would not recommend high expectations on this. Sit back and relax, and do give a thought to the ideas portrayed. To that extent of getting the viewers mind to think on the story and thus about the condition of the nation, this movie indeed has been successful. Rating:- 8.5/10. 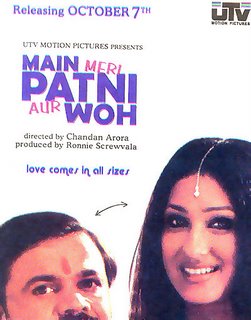 Main Meri Patni Aur Woh :- In a period where Bollywood relies very heavily on a studded star cast, exuberant settings, posh locales, and loaded concepts, here comes a movie that is down to earth in the literal sense – A less known star cast, a very simple, and normal story line, and highly simplistic portrayal of the same. Yet, it wins over you instantly. Though I must say at this point that this movie ran into controversy – accused of being a remake of a Malayalam movie – “Vadakkunokkiyanthram”. The same concept was also used in a kannada movie, “nanna hendati cennagiddale” (literally translated means, “My wife is beautiful”). So controversies apart, the story is about a middle class guy Mithilesh Shukla(Rajpal Yadav) known popularly as Chote babu, who, as fate would have marries Veena (Rituparna Sengupta). His wife is well educated, from a higher economic class, and above all extremely beautiful! Her beauty only adds to the woes of Mithilesh, who starts eyeing every person around him suspiciously and hence tries hard to keep them away from his wife. Enter the erstwhile friend of Veena, Akash (Kay Kay), and all hell breaks lose! Akash is better than Mithilesh in all respects, and what more! He is creative too! Well then there is the brewing misunderstanding, and then the cloud clears, and before long, its the usual happy ending that we all look forward to! The movie is extremely promising, and is very hearty. The emotional scenes are very short lived, and deftly handled. The movie is extremely smooth in its flow, and will leave the viewer smiling for a long time to come.
Ups of the Movie :- Absolutely superb acting by Rajpal Yadav and Rituparna, excellent direction, well handled story line, melodious and lilting songs. It is a tragedy that in the glitz and glamour of Bollywood the true talents like that of Rajpal Yadav, and the director Chandan Arora (who also directed “Main Madhuri Dixit Ban na chahti hoon“) are over shadowed! I would not be surprised if this movie is not nominated for any awards or even if it is, it may fail to rake any! That is just how superficial and hollow the industry has become. To praise the acting of Rajpal yadav would be an arduous task, as all the adjectives that one may use will seem hackneyed, and I am not able to coin new terms as of yet! He acts as naturally as he breathes! The song “Aaj maine dil se” remains echoing in the heart long after the movie has ended! The movie is extremely easy on the mind and heart of the viewer and maintains its lightness all through to the ending! It would be a crime to miss out on such a beautiful movie.
Downs of the Movie :- I really can’t think of any as of now, except that this movie is a Bollywood movie! In that, as I already mentioned, it will fail to receive the due appreciation and accolades it so richly deserves.
Overall Rating :-10/10. Again, Don’t miss this!