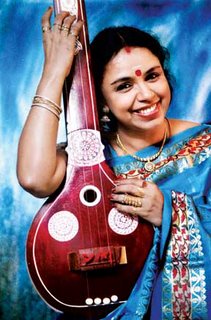 Morning Raaga was a bold attempt in the Indian film genre to showcase the fusion of Eastern and Western styles of Music. The story was thin, but the saving grace of the movie was ofcourse the acting prowess of Shabana Azmi, and the songs (not surprisingly)! The one voice that stood out in all of these songs was that of Sudha Raghunathan. Like the crisp sun rays of early morning filtered from amidst the waking up leaves on the trees, that touch our senses and liven them up – so does her voice flow mellifluously into the ears and awaken the spirit deep within! Don’t believe me? Listen to her rendering of “maatey malayadhwaja paalya sanjaate” from the movie!
Sudha Raghunathan, trained under her mother during her younger days, and eventually excelled in her performance, giving her the lifetime opportunity of learning karnatik music under the great Smt. MLV (M L Vasanthakumari) who recognizing Sudha’s prowess, rightly accorded the honor of being her successor! Since 1990 Sudha Raghunathan walk to fame, has been unobstructed! What with a mesmerizing voice and an endearing personality to couple with, she is hailed as the scion of MLV for Karnatik music in the present days. A mother of two, Sudha Raghunathan has enlivened the musical universe, shining as a bright star! The winner of Padmashri, she has also been drenched with showers of praises, titles and awards at various levels. My personal favorites among her renditions include, “Maha ganapathim”, “Maanasa Sancharare”, “Taaye yashoda”, “Bhagyada lakshmi baaramma”, “Marugelara O Raaghava”, and all the songs from her album “The Dance of Shiva“. She has over 75 albums to her credit.
Her excellence in her field has drawn her to travel world wide rendering exemplary concerts. She also heads the humanitarian “Samudaaya Foundation”.