Some observations from everyday life!!

A Glossary for Netizens! 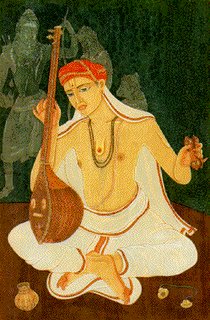 January 19th is celebrated as Sri Tyagaraja Aradhana. I remember the first Tyagaraja Aradhana that I had been to was at an age of 12, in the house of my Classical music Guru, Smt. Shakuntala Iyengar. It had been a few months since I had started to go to her, inorder to learn music. I had then known very little about Sri Tyagaraja. All I knew was that he was a great composer, and a saint, a devotee of Sri Rama. On that day, I sat in her house in rapture listening to the mellifluous flow of music from a whole gathering of classical music singers. At that time, it was the grandeur and magnificence of the whole thing that had me smitten! I made it a point to go to Tyagaraja Aradhana every year till my college days began. Then the vortex of academics digressed me from cultural events, and I am yet to relive those moments till date! Today, I offer this post as my salutations to the master of Classical Music, one of the divine trinity, a composer par excellence, Sri Tyagaraja.
Sri Tyagaraja was born in Tiruvaayur, on May 4th, 1767. He inculcated the devotion on Sri Rama right from his childhood. His worldly ties were materialized in the form of his wives Parvati (who died early) and later Kamalamba. Sadly he was left heirless! Nevertheless today, thousands of singers all over India and abroad, are carrying forth the legacy that was nourished and glorified by his contributions and compositions. He propagated the bhakti marga and used his compositions to celebrate the glory of Sri Rama’s deeds. He also wrote compositions on Sri Lakshmi, Lord Shiva, Lord Krishna, and others. He used music as a method of achieving the supreme grace (moksha). Some of his celebrated compositions include the various Pancharatnas (5 gems) –

Of these the most famous are the Ghana Panchakas, composed in the 5 Ghana raagas viz Nata, Goula, Arabhi, Varali, and Sri. I have already written about these in here. The other famous compositions by Sri Tyagaraja that I have heard include “dorakuna ituvanti seva”, “Sambho Mahadeva”(this song has been sung breath takingly by Unnikrishnan. It is a MUST NOT MISS), “Seeta kalyaana vaibhogame”, “jayamangalam nitya shubhamangalam”, “mokshamu galada (Smt. MS’ rendering of this song tears the heart, and brings tears to one’s eyes), “nagumomu ganalEni” (has been included in “Raayaru Bandaru Maavana Manege”, a Kannada film), “saamajavaragamana” (has been included in the movie “Shankarabharanam”), “seetamma maayamma”, etc.

Composers like Sri Tyagaraja, elevated the art of music to spiritual levels that showed an alternate path for even the common man, to achieve the bliss of sages! On this day, let us celebrate music, not just as an art, but as a way of life, as a spiritual bliss, and veritably as the essence of the universe! For the cosmic sound that reverberates through the space, is but a note of the divine music, sounded by the Supreme player himself.