Some observations from everyday life!! 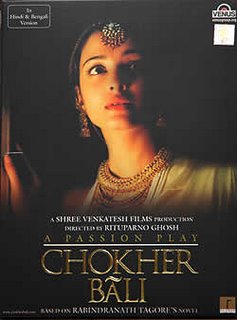 Yesterday, I happened to watch a much acclaimed movie by Rituporna Ghosh – Choker Baali (Sand in the Eye). It is a movie based on an adaptation of the novel by Rabindranath Tagore – Binodini. The movie relates the tale of 2 women – Binodini and Ashalatha and their intense struggle over a man Mahendranath. The main protagonist is nevertheless Binodini. Mahendra’s mother was initially interested in making Binodini her daughter-in-law, given her prowess in English and her beauty. But Mahendranath does not interest accept. Binodini is married to another person, who dies within a year. Mahendranath eventually marries Ashalatha (played by Riya Sen). Mahendranath’s mother brings the widow Binodini home, and she grows close to Ashalatha. Binodini is given a name “Chokher Bali”, by Ashalatha. Binodini who was till then restrained in her desires, begins to covet the marital pleasures that Ashalatha is enjoying. She now acts a seductress, and succeeds in enticing Mahendranath. This creates a rift between Mahendra and Ashalatha. The latter leaves to Kashi to spend some time in contemplation. Binodini is made to leave the house, and she arrives at the doorsteps of Behari (an adopted son for Mahendra’s mother) and pleads with him to marry her. Having been rejected by him too, she comes back to her village, to be followed by Mahendra, who would have left his house for her sake.
Binodini, now has her heart set on Behari, and rejects Mahendra’s advances, and pleads with him to take her to Kashi, so she can meet Behari again. He promises not to take advantage of her, and eventually at Kashi, Mahendra reunites with Ashalatha. Behari proposes to Binodini, but on the day of the marriage, Binodini leaves for good, and is never found.
The movie has a lot of highlights worth mentioning. The first and foremost is the depiction of the plight of widows in Calcutta, during the 1902 period. There are some very stirring moments such as when Binodini shows Ashalatha how to wear an English blouse her husband would have brought her. And while in Kashi, Ashalatha, being pregnant, is served fish curry by the widows. The widows then were barred from eating fish, and one can see the hunger in the eyes of the other widows, even as Ashalatha is eating the fish curry. Presumably, as shown in the movie, the widows were also barred from drinking tea. The script is taut, and interspersed with intelligent and witty dialogues – most of them flowing from the prime character, Binodini. The rebuke of Mahendranath by Binodini in several occassions has been very deftly treated. Right from the first advance that he makes towards her, Binodini has his manliness at her mercy! Sometimes, the viewer may be led to believe that Rituporna got carried away with the charisma of Aishwarya, and may have over cooked her character.
Sadly enough, Aishwarya Rai remains more of a sleaze factor in the movie than a character. Except in certain situations, her expression, in most part of the movie, is wooden! She fails to impress as a seductress. The necessary potion of intense romance, sexual tension, and allure is something that her body can just not brew! But its her eyes that are worth a thousand words and one has just gotto give it to ’em. The character of Ashalatha, played by Riya Sen (who for once doesn’t seem so vampish) is a lack lustre, infront of Binodini. I am now interested to read the novel and to learn the treatment of the characters from the master himself! Though, I am sure that Rituporna would have done justice to all of ’em.
The most touching part of the movie is obviously the climax, wherein through a letter to her friend Ashalatha, Binodini draws a comparison of their condition with their land, Bengal. She laments over how, their lack of exposure to the wider world, and confinement to the four walls of household, resulted, in both of them fighting over a single man, and thus devastating the whole household. She hopes that even though, they have both parted ways (much like Bengal was divided into East and West Bengal), they would continue to remember their erstwhile friendship, and that it would still ensure that any future meetings between them (if it were to occur) would be cordial and as friendly as it were before.
I would want to do a more thorough review of the movie and its intended message to be passed across to the common man. Nevertheless, I would love to read the novel, before dwelling into more intricacies. That being, peace for now! Catch up with this one, whenever u are in mood for some serious stuff!