Dedicated to the one n only RCB – my buds from CTS!

Movies and Me – It is a rather strange relationship we share! What was once upon a time amongst my favorite pastimes, (what with the wonderful innovations called VCP, and the VCD, DVDs) has now degenerated to an estranged companionship thanks to the cr**$ that the likes of KJ churn out these days, not to mention the over-acting Khan, strip-teasing Khan, Someone-teach-me-acting kapoors, and the boom-busty figures who have clogged the silverscreen. The fact that Himmesh doesn’t seem to realize which anatomical part of his body must be exactly used for singing hasn’t been a big help either! To sum up, well, its just pathetic! Now before you write me off as being impulsive in drawing conclusions, I must concede that there has been some pathbreakers off late too, and I guess, that is what remotely still sustains any remaining soft feelings!

But time and again, I fall back on my collection of movies, with those immensely likeable songs over which I can dedicate entire blogs and those timeless beauties on whom, I want to make these series of posts.  And so here’s a rehash of the series that I had originally started when I was with Cognizant ofcourse.

MADHUBALA:-  Born Mumtaz on Feb 14th, rechristened Madhubala by the legendary Devika Rani (she also gave her the first filmy break when Madhubala was 8 years old!), hers was a fairy tale story, albeit with a no-happily-ever-after ending. “Accha ji mai haari chalo maan jao na” – one look at the innocence brimming from her soulful eyes, and the enchanting smile; forget Dev Anand or Kishore Kumar or Gurudutt or Dilip Saab, I still flip over and go all woozy!  And who wouldn’t?!! Shooting to fame from “Mahal“(remember the song – 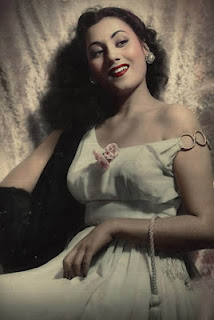 ‘aayega aayega.. aayega aanewala’?), she went up the ladder with her charm and enchanting smile leaving millions of hearts aflame! A bit of a digression here, this song from Mahal has continued to be one amongst my favorites for the simple reason of how much fun my friends and I had translating this to English during our school days! (He’ll come.. He’ll come.. He’ll come… He’ll come the one who has to come! He’ll come.. He’ll come) not to mention that we were actually crooning it much to the chagrin of our teacher Mrs. Lata.  Now ofcourse when I think back about it, the translation seems more like a desperation than anything eerily romantic!!

So eeenyways, “Chalti ka naam gaadi“, “Mr. and Mrs. 55“, “Kaalapaani“, “Mughal-E-Azam“, “Howrah Bridge“, “Half-ticket“, ”Jhumroo“, “Phagun“ were movies that sky rocketed her fame establishing her in the heart of the millions for decades even after her demise. As memorable as her comic sense was in “chalti …. gaadi”, so also were the soft sighs she took as Anarkali in “Mughal-E-Azam” – “yeh chiraag bhuja dijiye aalampanah…”

The ethereal beauty that nature seemed to have bestowed her with, however did prove rather effervescent, with her sad and early demise at the age of 36, due to a heart ailment (which indeed did cast dark shadows over Kishore Kumar too!).  However, I guess even nature couldn’t repeat this wonder once again, which still leaves her a towering Masterpiece.

NARGIS:- Whether it was her pristine face, or the rather dreamy eyes, or the soft shy smile, Nargis was indeed worth her name. In a career that gave India its first ever entry into Oscars through “Mother India“, Nargis’ acting skills had created wonders that very few actresses could even dream of matching, let alone surpass. To this day the slight fear, withdrawal, and yet the willingness to submit herself as Raj Kapoor brought his lips close to her, amidst the echoing thunder and flashing lightning, remains evergreen in the minds of her fans – “pyaar hua ikraar hua hai.. pyaar se phir kyon dar ta hai dil“. Her sporty tom-boyish look that she wore with the characteristic bob-cut, though not uncommon, had a uniqueness of its own. “Aah“, “Shri 420“, “Mother India“, “Andaaz“, “Barsaat“, “jaagte raho“, “chori chori“, “Aawaara“, were some of her noteworthy movies. She was born Fatima Rashid, and was the first actress to be conferred “Padmashri” award and also given a Rajya Sabha seat. She was married to Sunil Dutt and eventually lost her battle to Cancer and succumbed to it. Some of the memorable tunes from her movies include

NUTAN: Very few actresses take to the aspect of aging gracefully. When one talks of grace, the first person who comes to my mind is Nutan. Even after getting the roles of a Mom, she essayed them with such demeanor as to cast a cloud on the various actors and actresses who still continued to prance around with kids!  Grace indeed!!

The first time that I recollect seeing Nutan was in the famous song – ‘Mora gora rang lai le‘ (debut song of Gulzar Saab as a lyricist) from the movie Bandini – clad in a chiffon saree, with her dusky color, she seemed like simplicity personified. Her exemplary acting skills 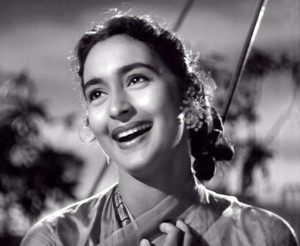 worked wonders in several well acclaimed movies such as Milan, Seema, Tere ghar ke saamne, Anari, Main tulsi tere aangan ki,Meri Jung, Karma, Saraswati Chandra, Chhalia, Paying Guest, Sujata, Bandini (her greatest performance) and even a brief stint on the TV serial – Charitraheen. And before long I had become a fan of her (as also several others.. out to be listed here). Guess it must take a special mentioning here that she had won Miss India contest during the 1950s!!!

Be it prancing around with Dev Anand in Tere ghar ke saamne for “yeh tanhayee haaye re haaye” or trying to learn a song from the village lad in Milan “saawan ka mahina pawan kare sor…“, or the ever loving mother singing “zindagi har kadam ek nayee jung hai“, Nutan was a charisma at work on the silver screen. It still remains a wonder to see how beautifully she carried on with her stature down the decades of her association with Bollywood, during which time she won 6 Filmfare awards.

Coming to songs that have regularly featured in my playlist down these years include :-

Ofcourse the list is one that is going to grow, but lemme not flood you with all of the details. It is but only a start, and this is but only one of the sections! Isn’t it?!  Now our esteemed self will get back to enjoying my vacation, and humm the timeless tunes thinking of the beauties.. and dont’ forget to check back in as we start scaling up the decades till 2007. Sakkat ala! 😉

Note:- pics are courtesy of http://en.wikipedia.org/wiki and the videos are ofcourse from youtube! 🙂